Well done to Sam Freeman and Rory McLellan on their selection on to the GB team for the World Championships in Torun, Poland on 7th April 2019.  Both boys have impressed selectors with their high quality international fencing in the past few months and it’s a great honour indeed for Salle Ossian Fencing Club to take two of the three places available to GB fencers for what is the highest accolade in GB youth fencing.  We wish them every success!

Salle Ossian fencers sweep the board at this year’s Scottish Youth Championships.

Mark Alvarez wins the u20 event for the fourth year in a row – and he still has another year to go. He is flanked here by Ewan and Rory who took bronze medals. 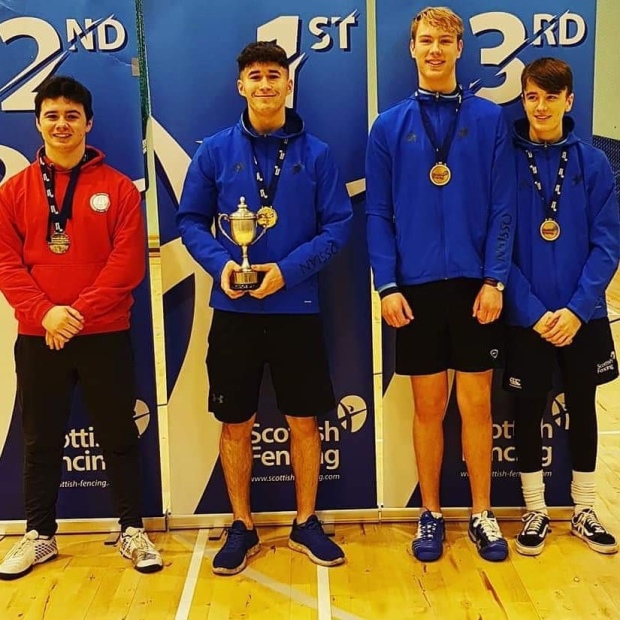 In the women’s u20 event Ariana Serafinceanu won a surprise final against the GB no.3. And well done to Charlotte and Caitlin on their bronze medals. 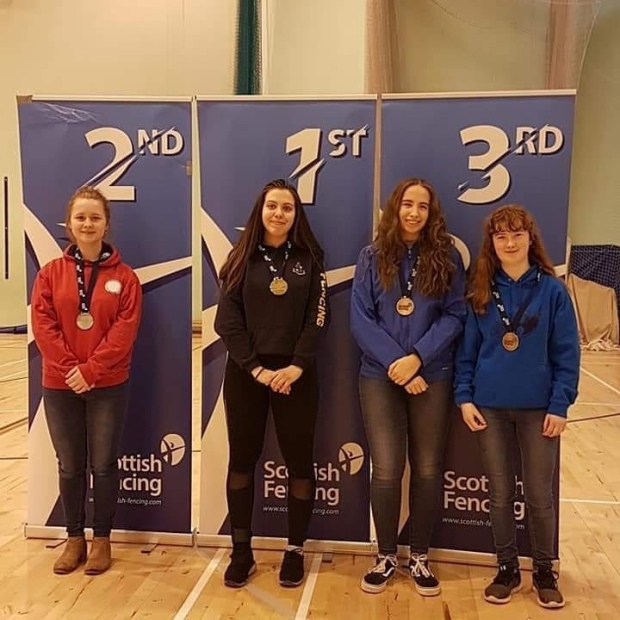 The boys u15 Champion is Hendrix Knight. A terrific achievement for this hard working young man. And well done to Finn on a magnificent silver medal.

The girls u13 Champion is Lucia Honor, but it was a clean sweep for Salle Ossian ladies with medals for Honor, Sophia and Eve.

And last but not least, Miller Hetherington is the Scottish U/13 boys Champion, with team mates Oisin and Hugo taking silver and bronze.

2018 was the best year in Salle Ossian’s short history, but it’s nothing compared to the blast of activity, ambition and hard work by our athletes at the start of 2019.

On international duty, Jess Corby, Kate Daykin, Sam Freeman, Rory Mclellan, Ewan Robertson and Charlotte Wilson-Smith were travelling the globe, representing GB at senior, under 20 and under 17.  Jess had an impressive outing in Salt Lake City, USA winning against a strong Mexico at the Senior World Cup team event.  Meanwhile Sam Freeman takes a season best in Grenoble, France to ensure his place at the World Cadet Championships in Poland in April.

Closer to home, young Josh Bryden has been competing around the UK on the Leon Paul Junior Series where he has medalled at the first two events of the year, winning the Stratford event and taking the silver in a close 9-10 final in London.

Meanwhile Kate Daykin became the British U23 Champion with her strongest performance at this event, earning automatic qualification to represent GB at the European U23 Championships coming up in March in Poland.

Our younger fencers continue to dominate the Youth Development Series and Oisin, Hugo, Miller, Hendrix, Eve, Honor and Lucia have all been selected to represent Scotland at the Challenge Wratisavia under 15 event in Poland in March.

What a start to what promises to be an amazing year!

The Scottish Secondary Schools Championships were held in Linlithgow on Saturday 25th November 2018. This is one of the largest on the youth calendar and the most prestigious for schools.

In the sabre events, Salle Ossian fencers dominated in all the age groups entered and some fantastic performances from our newer members. Well done to everyone. Our new Scottish Schools Champions 2018 are:

Under 14 girls, Lucia Paul (with her sister Honor taking silver).

Over 14 girls Champion is Charlotte Wilson-Smith.

Special mention in the under 14 boys to Oisin Lyndsay-Dorward, 11, who has been fencing since February and worked incredibly hard all day to take silver medal – punching well above his weight. 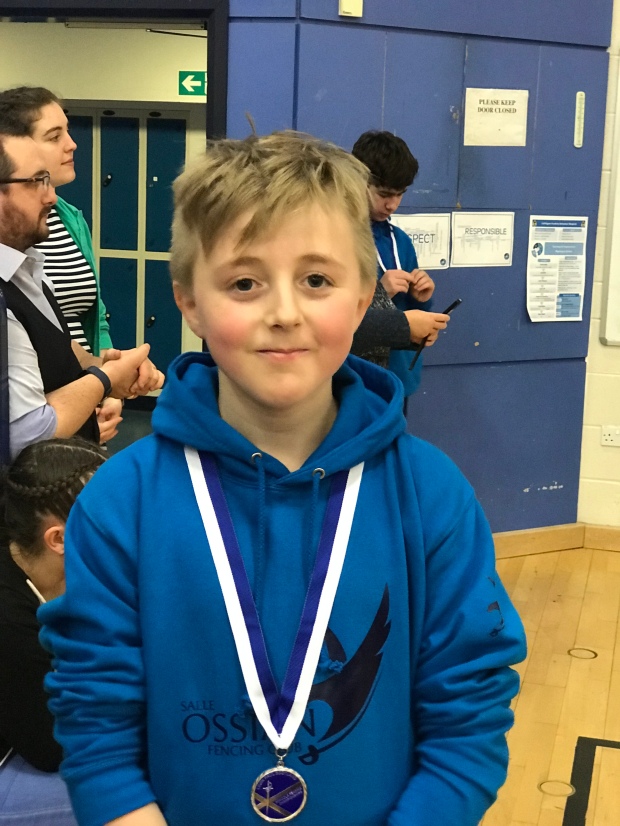 The over 14 boys event was won by Rory McLellan, with his team mate Hendrix Knight coming second.

And last but not least, the senior boys event was won in extraordinary style with a very determined 15-0 win by Sam Freeman.

Well done to all the competitors and our thanks go to the organisers, officials and many volunteers who made it a cracking event. 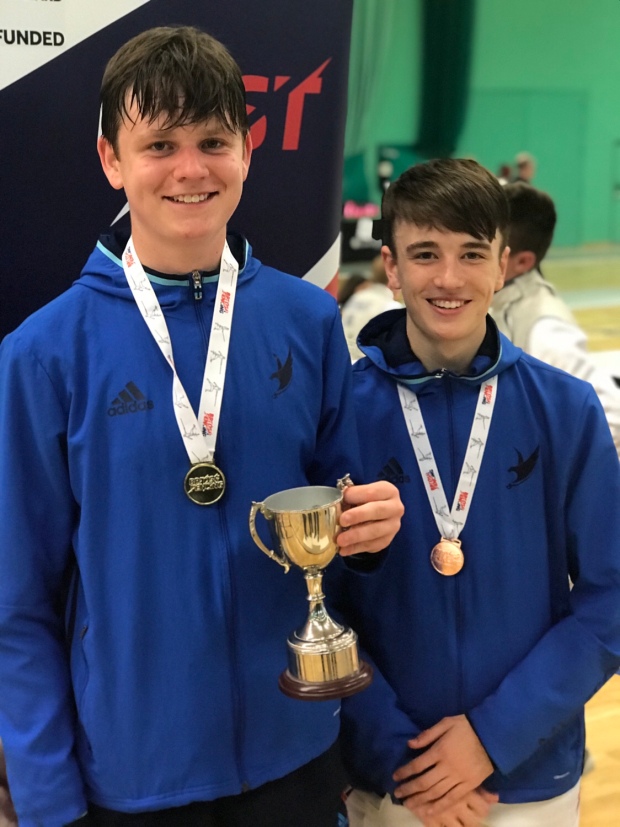 Extraordinary scenes at this year’s British Cadet Championships saw 15yr old Rory McLellan take on the best of the best at Nottingham University to win the coveted British title. Despite carrying a heavy cold he went 6/0 in the poule stages to qualify as one of the top seeds for the elimination rounds. He steadily worked his way through the field and improved throughout the day. He really found his stride from the quarter finals, where he looked a class apart.

Meanwhile, on the other side of the tableau, 16yr old Sam Freeman had an equally brilliant day showing pure class in his unblemished poule stage and then making his way to the semi final. He took the bronze medal but more importantly increased his national ranking to be the new British No.1.

Rory and Sam will both be selected to represent GB in the upcoming international events in Bulgaria, Poland, Germany and France.

We’ve been running adult classes on a Friday night for some time and we’re expanding to include foil and sabre as well as epee.

Ideal for adults of any age who are looking for a relaxed and fun evening of recreational fencing.

FORTE (Fencing)  In fencing, forte (from the Romance root meaning “strong”) is “the strong part” of the blade—the one third-closest to the hilt. The “strength” refers to the control established over the opponent’s weapon upon contact of one’s forte with the opponent’s foible (a situation of favourable leverage).  Wikipedia

Salle Ossian is at the forefront of delivering a Sport for Change initiative that aims to reach out to community groups whose members have been subject to violence, trauma or adverse childhood experiences and who might benefit from the therapeutic opportunities inherent in the sport of fencing.

In fencing, we look at strength in a different way, to mean control of one’s own actions and interactions with others.  Anyone new to the sport will quickly discover that the attributes of self-control, self-confidence and self-belief are immediately accessed and developed as participants are encouraged to take up something completely new, build on their strengths and work with others to improve problem solving and resilience.

How we do this is by engaging with local partners, providers and supporters, to run short 6 week programmes of fencing themed games and practice which inspire and motivate them to take part and to learn and develop.  The journey individuals take is outlined here 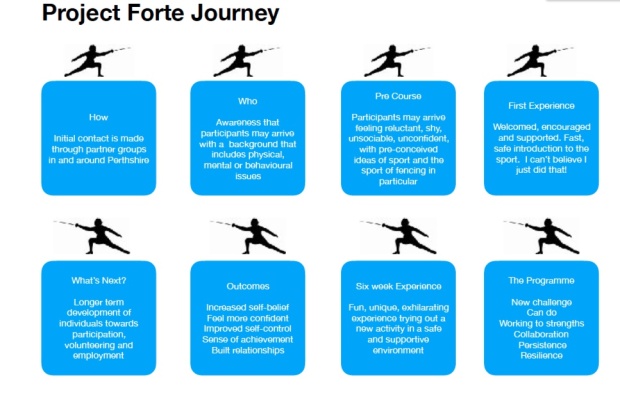 Project Forte will delivered with the support and assistance of Salle Ossian Fencing Club, Scottish Fencing, British Fencing and Perth and Kinross partnerships.